I’m writing about so many other cultures, I should write something about Dutch beer culture as well, and don’t make the mistake that it doesn’t exist, it does 🙂 It’s just sometimes hard to see when you grow up and live in the middle of it. So it is for me and I no doubt don’t see weird Dutch culture things that are obvious to others. Some things I do know though, and apparently more than a posts worth, so as usual I’ll come back to this subject in a part 2 and maybe a part 3 some day. 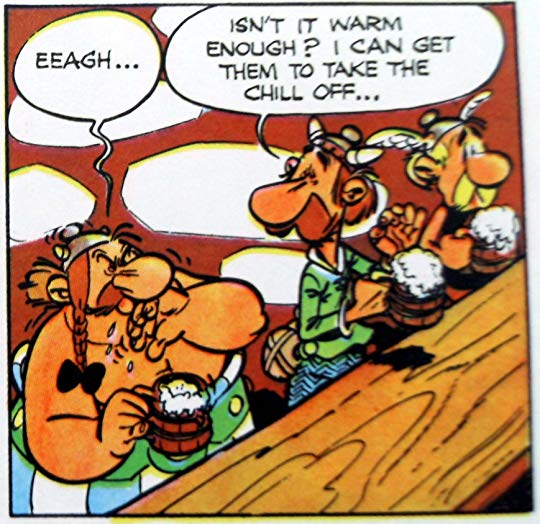 In the north of England they want a full head of foam (about 3 cm), in the south they don’t want any foam, because it would be cheap of the bartender not to fill the glass to the brim; you are paying for the beer, not the foam. England is more infamous for that last one, especially in combination with the warmth of the beer. Belgium people go for a overly full head of foam on their beers. Not as full though as the German siebenminutenpils. In the Netherlands you learn from a young age that the foam head should be two fingers thick, no more, no less. I can tell you that’s not easy, to serve every beerstyle with a two finger thick head of foam. Why do we want that? This foam head keeps the carbon dioxide retained for some time (it goes into the foam and takes stuff/flavours/aromas/bitterness with it, another story) and the oxygen out. Why the two fingers? I don’t know, but my guess is it’s probably a good balance between wanting as much beer as possible like the English, but still retaining the quality of the beer by keeping the oxygen out as long as possible. In the Netherlands we also use a skimmer for the foam, something you will NOT see in Austria, Germany or England. It is said that if you use the skimmer just right, it should make an extra film on top of the foam to keep that dreaded oxygen out. It only works if you do it just the one time though (levend afschuimen/live? skimming), else you scrape the film off again. It could also be that you skim off the bigger bubbles because the smaller bubbles more easily stabilize in a proper head. You should only use a skimmer for lagers, preferably only pilsners. For example the foam on a Dubbel should stabilize itself, by leaking of those bigger bubbles.

As any other country with a substantial beer culture the Netherlands also have their own specific glasses. I will write about those in a separate post more extensively. Almost every brewery has their own glasses, sometimes several for all the different beerstyles. The most famous general glasses are ‘het fluitje’ (the little flute), ‘het vaasje’ (the little vase) and the ‘kraagglazen’ (collar? glass) or ‘stapelglazen’ (stackable glass). Although they’re not used so much anymore, you cannot have grown up in the Netherlands without knowing the last ones. They are cleverly designed as a small glass with a wide rim which makes it easy to stack them and pull them apart again, which is a wonderful invention for school parties and other parties where you need to fill a lot of glasses quickly. It’s also convenient for the Dutch cheapness, because if you poor a beer in it with two fingers of foam, the percentage of foam is a lot higher than in a normal glass. While it still looks about the right balance, it’s actually more like a Haags bakkie (a very small/frugal cup of coffee). You might want to check out: How to drink beer with the Dutch by Bart de Pau.
It’s also normal in the Netherlands that you get asked if you want a glass with your beer. Most Dutch people tend to drink their pilsners straight out of the bottle (or the can); hey, it’s already in a glass… 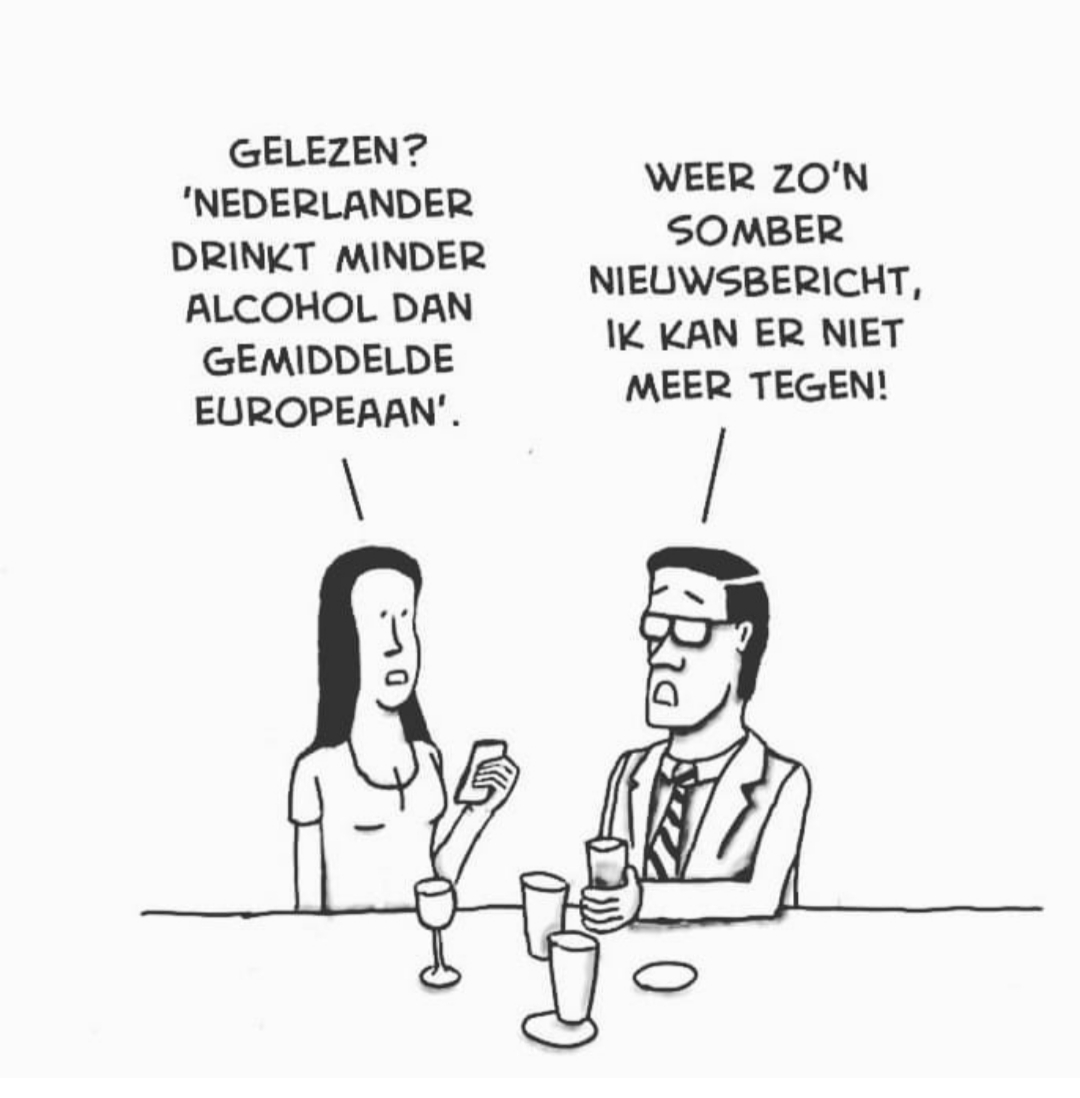 Dutch people are famous for drinking at home! Contrary to English people we don’t go out very much to have a pint on weekdays, we don’t have a pub on every corner and it’s normal to first drink some beers at home before going into town in the weekend. The Dutch alcohol drinking numbers are pretty low compared to our neighbours. I think it might have something to do (well, partly) with the limited accepted alcohol drinking times and occassions in Dutch culture. It’s okay to drink a glass of wine during dinner, and maybe a wine or beer in the evening while watching soccer or a movie. Of course you drink when you go out for dinner and/or go out clubbing, both generally in the evening and mostly in the weekend. You drink a beer when you are having a barbecue, a party, a wedding or…. Basically it’s dinner and event/party oriented. A Dutch person typically doesn’t drink alcohol during lunch (I’m looking at you, Belgium), certainly not during breakfast (unless you are at a posh ór an all-in hotel on vacation and you can ‘let yourself go’). It doesn’t mean Dutch people don’t drink much when they do drink, especially on saturday nights in town it seems to be a sport to become as wasted as possible as quickly as possible, mostly with a lot of pilsners and shots of liquor, but in Bavarian we Dutch people still have a reputation of not being able to hold our liquor 😉 . I believe real bargains with alcohol are forbidden in the Netherlands (so no Wetherspoon like ‘3 cocktails for the price of 2’ on the menus), but we still quietly permit happy hour, a meter of beer and ‘radje draaien’, which is basically gambling to win a lot of alcohol. It’s not necessarily legal as it is ‘gedoogd’, same with the marihuana.

One infamous alcoholic event in the Netherlands is the start of the new university year or the hazing of new students by student associations and corps (This was last fortnight, so I had to write about it). Every year they promise less alcohol will be involved and every year alcoholic incidents happen… Apparently the time as a student is thé time to party and drink loads of alcohol, so during hazing you get a crash course in the alcoholic part. Which is apparently some western world wide thing if I have to believe the average coming of age movie. In our time (I’m so old :D) the legal drinking age was 16 and I daresay my highschool drinking days were much more sever than my university drinking days. But to be fair, I didn’t join a student association, contrary, I tried to steer well clear of them.

Another famous alcohol related party in the southern parts and some specific other more northerly towns in the Netherlands is Carnaval. Don’t say it’s a beer fest though, because it isn’t, not in its core. Historically it’s the party before the fasting period. Especially in Limburg and Brabant the Carnaval season already starts on the 11th of the 11th month, 11 being the funny number. I’m not a part of a Carnaval association, so I’m not sure what happens then, but I’ll interview my cousin some day if you want to, since he was Prins (Prince) Carnaval this year and he can probably tell me all about it. I do know that in February or March you won’t be able to do any business with people in the south for four days and everything just basically shuts down, because too many people are celebrating Carnaval. The party starts officially on a Sunday (but naturally a lot of people begin on Thursday or Friday already) and ends on Wednesday. In at least ‘s-Hertogenbosch it starts with Tonproaters (people who tell about the last year in a funny way). It’s important to dress up. When you are part of an association you have a dress code, when you want to celebrate in Limburg you have to make sure you made the outfit yourself and that outfit should be GORGEOUS. That is what I like the most of Carnaval by the way, designing and making an outfit. In Bergen op Zoom they even dress up the Church tower called De Peperbus (the pepper canister).Alll towns are decorated, especially the cafés, and everyone celebrates, children included. En masse we party on special party locations and in town and that partying involves a lot of pilsner. On wednesday morning you eat herring and after that you go on with normal life.

To come back to the beer part of the Dutch beer culture and not the Dutch alcohol culture, I should tell you about summer and winter beers and bock beer season and alcohol on the road and more, but I’ll save that for a later post.

Which Dutch beer culture thing did you encounter and surprised you?